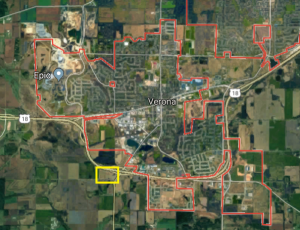 Jim writes “Over the past two years, Verona has gotten pitches for major developments to expand to the north, northwest, southeast and southwest. Monday, another pitch for a development in Verona’s Southwest Area – for a large-scale commercial center and an apartment development – is up for review.

The 95 acres between Valley Road and the U.S. 18-151 bypass has been the property of SSM/Dean Health for more than a decade, and Verona’s addition of that area and land around it to its potential expansion area in 2012 was partly a result of Dean’s plan to build a clinic and complementary senior housing there someday.

Madison-based commercial developer Welton Enterprises’ plan, first discussed with city staff last summer but submitted formally earlier this month, leaves the “someday” Dean clinic a possibility. It cuts off a 15-acre chunk near state Hwy. 69. and proposes two more imminent pieces – 48 acres of commercial and mixed use development and as many as 700 apartments on 22 acres next to the Sugar River wetlands.”

Read the rest of the “Developer Looks Southwest” article here.